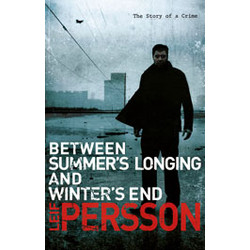 At my second attempt, I have completed this tome of more than 600 pages, a book that in some senses precedes Another Time, Another Life by the same author, which I read recently and very much enjoyed.

Between Summer’s Longing and Winter’s End tells the story of the apparent suicide of an American student, John Krasser, by jumping from a window in Stockholm. There are several witnesses to this event, some of whom note that the victim’s second shoe fell to the ground some seconds after he did.

The first description of the crime involves the police investigation, whose aim is simply to deal with it as quickly as possible and write it up as completed. Here we see the police force in all its self-interested glory, as officers play the system to their own ends in the knowledge that colleagues will cover up for them.

The ripples of the crime spread out in a gradually more complex way. Sweden’s police force has secret operations within it – one of these operations is charged with drawing up lists of possible terrorists and other threats to national security, in those days mainly the Kurds and right-wing elements within the police. One has the sense that this operation is mainly designed to protect the status-quo, with a few extremists and hotheads being front men for a deeper, more sinister conspiracy. The apparent suicide of Krasser becomes a significant part of this operation.

In another parallel development, a secret message that Krasser had written to a well-known cop, Lars Martin Johansson, emerges after his death. Johansson is portrayed as the epitome of the Swedish police force in his calm, taciturn, intelligent and apparently incorruptible personality. He gets drawn into the investigation, using a trip to an FBI training course in the USA to find out more about Krasser and his activities.

As well as these various elliptical descriptions of the aftermath of Krasser’s death, the book is split into several parts describing Swedish internal politics since the end of the Second World War, and its role on the international stage at at time when the country was intimidated by the Soviet Union’s growth but without allies in the West who remembered all too well Sweden’s wartime Nazi sympathies. Towards the end of the book, Johansson comes into contact with a book that Krasser was researching, and after some procrastination, reads the draft. This draft provides the core of the story and tells the reader what is truly going on, pretty much.

Between Summer’s Longing and Winter’s End is a depressing, leaden and grim read. It was a struggle to complete the book as it is so fragmented and contains so many unpleasant characters. Yet there is a fascination to it, mainly its focus on international cold-war politics at the time (the 1950s to the mid-1980s) and how Swedish society adapted to it in a deeply corrupt manner. I can’t say I enjoyed this book, and did not like it as much as I did Another Time, Another Life (which covers 1975 to the turn of the millennium, and which can be appreciated without having read this one first), but I am glad I read it, and can see that it is an achievement, particularly within Sweden, to have written such a self-critical, even self-loathing, book.

I bought this book.

Other reviews of it are at: Crime Scraps (and here), Shade Point, The Independent, To Be Read, and a further collection at The Complete Review.