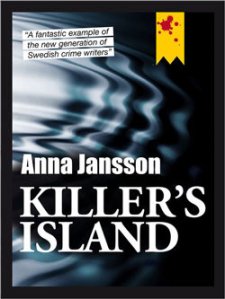 The island of the title is Gotland, best known to me as the setting for Mari Jungstedt’s novels. Killer’s Island is the first in the Maria Wern series to be translated into English but in fact is 11th (or according to some, 10th), chronologically. The books have also been filmed as a very popular TV series in Sweden.

Maria is a criminal inspector in the police team on the island. On the way home from a night out with her colleague Erika, she witnesses a boy being attacked by three men and tries to help him. She herself is seriously injured and ends up in hospital. Much to her annoyance, she can’t investigate the case because she is a witness, but she follows progress with interest.

Maria is not inactive for long, as a few days later the body of a woman is found, clad in a wedding dress, in the botanical gardens. The victim is found to be a nurse at the same hospital where Maria was treated, who has been consulting a local doctor because of insomnia – a doctor who turns out to be the new love-interest of Maria’s colleague Erika.

Killer’s Island is a very quick and compelling read. However, it is very much a mystery in the Agatha Christie style than one that is realistic. The reader is only told information if it is (or will be) relevant to the plot. Everybody turns out to be connected to everyone else. The identity of the killer is not a surprise. He or she is someone who, we learn at the start of the book, has hacked into a Russian satellite that monitors an oil pipeline, and uses this information to track people on the island. He or she is also able to hack into police and hospital computers so knows everything about the potential victims and the investigation. So there isn’t much of a crime puzzle element to the book, though there is plenty of suspense.

The strongest element of the novel is its depiction of the characters, including the members of the police team and their various romantic and other dilemmas. Clearly there is a lot of background that the English language reader cannot know about, but even so, the individuals and their problems are real, often involving their children (almost all of them are divorced). The other characters – witnesses, suspects and victims – are also presented well so that the reader becomes involved in their concerns and lives. Another strong element of the book is its local atmosphere, providing a fascinating picture of daily life on Gotland.

Killer’s Island is an old-fashioned book (despite its nods to mobile phones and the internet). It is rather like the books that have been churned out non-stop by crime authors since the Golden Age of Christie, Sayers and Allingham. If that’s your cup of tea, I am sure you’ll like this engaging, pleasing account in which everything is solved and tied up in ribbon at the end. I enjoyed the book as a change from my usual reading, but I am not converted to this subgenre.

I bought this book.

Wikipedia: Anna Jansson and her books (titles in Swedish!).