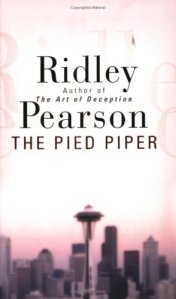 Although this is fifth in a series, it’s the first book by this author I’ve read. The setting is Seattle, and the story concerns the city cops who are investigating the kidnapping of a baby while the parents have gone out for the evening, leaving their two infants in the care of a babysitter. The police quickly connect the case to a spate of similar abductions that have been going on across the country – in fact Sheila Hill, their commander, has anticipated this event by setting up a task force to be ready and waiting.

Over the next 550 pages the reader is taken on a roller-coaster ride as the investigators pore over every detail of forensic evidence in their desperate attempt to apprehend the perpetrator(s). The attempt is desperate because the local police are driven to solve the mystery on their own, without the interference of the FBI taskforce that is already working on the case. It is, of course, impossible to keep them out of it, so the two teams work in parallel with a daily meeting to share what has been found over the past 24 hours. There is a lot of petty politics, in which both sides keep information back, either not logging it at all or waiting until after the joint meeting to do so.

After 200 pages and one further abduction, the case turns very personal in a nasty plot twist. Although the preface and the cover blurb of the book both reveal this twist, I shan’t do so here, as it changes the entire direction of the book as well as the moral perspective of the participants, and would spoil the reader’s experience to know it in advance.

The main strength of this book is the ensemble nature of the storytelling. The novel is in the tradition of Ed McBain’s 87th Precinct series, as we follow the personal lives and concerns of various police officers as well as their working practices. There are thrills and tensions aplenty, in a printed equivalent of Hill St Blues or The Wire, as the case widens out into a brilliantly described narcotics bust as well as many other elements too numerous to describe here, including intelligence-gathering, computers and psychology. At the same time, there is sex and tragedy in spades as the all-too-human cast of characters determine in unpredictable ways how events will turn out.

The main conundrum, that of how the Pied Piper manages to stay one step ahead of his or her sophisticated trackers, is solved in a way that I found extremely unlikely, but even so it works within the piled-on, ratcheted-up excitements and cliff-hangers of the plot. The way in which the investigation is hampered by the inter-agency rivalry is much more believable, and adds to the emotional temperature of the book. Although I don’t think the author needed 550 pages to tell his story, which would have benefited from good editing, I thoroughly enjoyed this novel – which at its heart is an excellent crime thriller – and shall definitely be reading more in the series.

I bought my copy of this book. I discovered it via a recommendation by Keishon of Yet Another Crime Fiction blog. Her reflections on the book are here.

I can’t find any other reviews of this book that are worth reading, but I see that the 3-CD audio version is considered to be far too heavily abridged by more than one reviewer.

Author’s website. He’s written many novels including this series – the titles and reading order of which are listed at the website, and at Wikipedia.

13 thoughts on “Book review: The Pied Piper by Ridley Pearson”