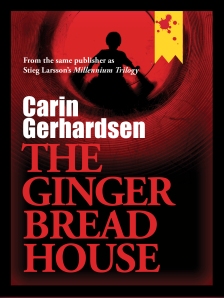 Conny Sjöberg and his team make a welcome addition to the crowded but mainly enjoyable world of translated Swedish crime fiction. The Gingerbread House is an accessible book, following the traditional route of a murder (later murders) investigated by the police force in this country area north of Stockholm.

Thomas, a reclusive man in his mid-forties, has a job delivering mail in a large company. His whole life to this point has been shaped by his experiences at pre-school (this translation is into US English), when he was mercilessly bullied by the other children while the teacher looked on, uninterested. By chance, while taking a train journey, he spots a fellow-passenger he recognises as one of the main instigators from those days. Impulsively, he follows him. The next day, the man is found bludgeoned to death in a temporarily empty house in the neighbourhood.

Enter Conny and his team, in particular a young officer called Petra Westman, whose lives and concerns are woven into the story of the murder investigation. Petra, as well as being a capable and enthusiastic colleague, is concerned about a bad experience she had, or may have had, after meeting a man in a bar. She takes matters into her own hands to try to find out what happened, and becomes embroiled in a subtle, but important, case of her own.

The details of the murder investigation continue alongside Conny and his amenable wife Asa’s domestic life, a somewhat hectic one as they have five young children, the youngest of whom are adopted twins. Despite all the demands on him, Conny is a patient parent and a dedicated officer. The investigation remains stalled for most of the book, however, while the assailant attacks other ex-pupils who now live in different areas of the country. It takes the police an inordinately long time to make the links between the cases – computerised sharing of information between squads does not seem to be a feature of the Swedish police force as depicted here – but once they do, matters come to a head quickly, not forgetting a final twist.

The Gingerbread House is the sort of book that slips down a treat, despite some over-gruesome murder descriptions. The domestic and local details are fascinating, and the ensemble cast of characters allow the author to examine contemporary issues without slowing up the pace of the narrative.

I purchased this book.

Other reviews of The Gingerbread House: Criminal Element and Mystery Fanfare (interview with the author).

Stockholm Text: about this book and about other Swedish crime novels from this publisher.

15 thoughts on “Book review: The Gingerbread House by Carin Gerhardsen”