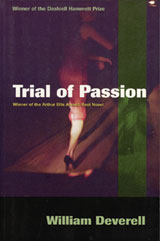 Trial of Passion is the first in a very successful series about lawyer Arthur Beauchamp. In this book, Arthur decides to retire from his lucrative practice in Vancouver and move to Garibaldi Island off the coast of British Columbia, perceived as a hippies’ hangout by the stuffed shirts surrounding him. Part of the reason for this move is that Arthur’s marriage is on the rocks. Arthur’s perception of why the marriage is failing, and his gradual realisation that the reason is not what he thought it was, forms part of the background of this novel.

Arthur, a courtly man, embraces his life on Garibaldi Island, where he’s bought a huge but somewhat decrepit mansion. He’s in his own paradise, pottering around the garden and grounds, getting to know the various idiosyncratic locals, and adjusting to life in the slow lane. Of course, his peace does not last, as his ex-colleagues are more than keen for him to take on one last case, that of law professor Jonathan O’Donnell, who has been accused of raping one of his students. Arthur is adamant that he won’t take the case but later on persuades himself to do so for a typically quixotic reason, recognising a fellow alcoholic (though Arthur himself has been on the wagon for many years, he did have a two-year “lost weekend” some time ago). Until this point, the narrative is interspersed with excerpts from the preliminary hearing in the case. And indeed, after this point, these extracts continue, as Arthur reads about the alleged crime from the point of view of both participants, and various witnesses. The reader is also privy to both participants’ psychoanalysis sessions.

Trial of Passion is a leisurely book. The slow pace is well-suited to the sections on Garibaldi Island, which are quite charming in their depictions of assorted characters and their interactions with Arthur. It is less suited to the story of the lead-up to the trial, as it is pretty obvious to the reader what is really going on between the plaintiff, her boyfriend and the defendant, but the author takes his time in revealing all the hidden elements of his tale and in explaining apparently bizarre behaviours. The pace picks up in the final section of the book, the trial itself, though there was a sense of repetition as various witnesses whose written testimony we’ve already read take the stand (though they don’t all stick to their scripts, of course). The trial scenes are sharply told, but I found it hard to believe that the climactic ending of the case could have happened in the way that it did.

Trial of Passion is a well-written, erudite book that features several well-portrayed, real-world characters and has plenty of pithy observations about human nature and what is truly important in life, compared with what we think is important. Arthur’s inner journey from self-doubt to a somewhat more confident persona is nicely done; I shall look forward to reading more of the series in future.

I purchased my copy of this book. It won the Arthur Ellis award for best novel, and the Dashiell Hammett prize. There are (according to Fantastic Fiction) four more books in the Arthur Beauchamp series.

Read other reviews of Trial of Passion: Mysteries and More from Saskatchewan, Quill & Quire, and some extracts from press reviews at the author’s website.

Author’s website, including background to the books, about Arthur Beauchamp and more.

12 thoughts on “Book review: Trial of Passion by William Deverell”