I very much enjoyed The Flatey Enigma. Set in 1960, some islanders from Flatey, off the west coast of Iceland (maps are helpfully included), find the decomposing body of a man on the islet of Ketilsey during a seal-hunting trip. Kjartan, a magistrate’s assistant, is sent over from the mainland to supervise the collection of the body and to find the identity of the corpse. Although the first part of the assignment is easy enough, it proves harder to complete the second — which, it is hoped, will indicate why the man was on the islet and how he died there.

The first chapters of the book are slow-paced, describing life on the small, impoverished island of Flatey (1.2 miles long and 1/3 of a mile across). Scraping a living is hard, and through the eyes of Kjartan the reader is given a full account of the ways of life of the islanders, complete with the awful sounding meals they eat. At the end of each chapter is a short paragraph about the ancient Book of Flatey, the earliest written history of the region – “Vinland”, Norway, Denmark, England and other countries all feature. A copy of the book is kept on the island but the original is in Reykjavik. There is a famous riddle associated with the book, which many have tried and failed to solve – the titular Flatey enigma. (The Flatey Book is real, but the enigma is a creation of the author.)

The investigation broadens to include the Reykjavik police, in the persona of a lazy but likeable detective Dagbjartur Arnason. Even though described as not the smartest investigator in the force, Arnason soon discovers not only the identity

of the corpse but also a story of academic intrigue. The book develops an absorbing rhythm, as chapters tell the story of the investigation from two places, the island and the city, with each chapter ending with one of the 40 questions that make up the enigma, together with its possible answer(s). Towards the end of the book, the very different cultures meet head-on as two city detectives (considered more reliable than Arnason) visit the island to, they think, sort the matter out promptly. The chapter endings, the reader realises, themselves make up a story within the story told in the main novel, as it becomes clearer who is reading the excerpts from the book, and who is listening. And in themselves, they are relevant to the present-day events.

As a crime novel, the plot is well-constructed. The ending depends somewhat on the reader not having been told certain pieces of information, and perhaps one coincidence too many, but that did not spoil the book for me. It is also an unusual, unexpected solution. The historical-cultural story of the Flatey book and associated enigma is both fascinating to read about, and provides a strong motivation to read on to see if, and if so how, the puzzle is solved. The main enjoyment of the book comes from the descriptions of a lost way of life in the harsh environments of these islands 50 years ago, 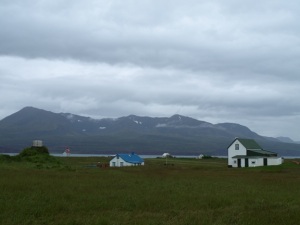 and in the mists of time where mythic stories of sagas, battles and bravery were handed down from generation to generation.

The translation is into US English, but the text has not been Americanised. The book itself was nominated for the Glass Key (Nordic Crime Award) in 2004; two more by Ingolfsson, House of Evidence and Day Break, are said to be forthcoming in this imprint.

I received this book free in the Amazon Vine programme.

More about the island of Flatey and the Flatey Book can be found at Wikipedia.

There are not very many reviews yet of this book (published in February) that I could find (that are sufficiently well written for me to provide a link here, at any rate), but there are some reader reviews at UK Amazon (there are also some at US Amazon but they seem pretty, er, informal).

A word about Amazon Crossing: apparently this imprint uses customer feedback “and other data” to identify and translate books into English. Recommendations are invited to: crossing-pr@amazon.com.