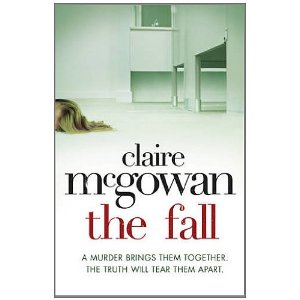 The Fall
by Claire McGowan
Headline, 2012.

The Fall tells the story of the aftermath of a crime from the point of view of three characters. Charlotte, in PR, is engaged to Dan, a city banker. Charlotte and her mother have been planning the wedding to the nth degree for many months. A week before the big day Dan, frustrated at the obsessively detailed and protracted level of effort required to organise the event, decides he’d like to go to a night club after a terrible day at work, so drags Charlotte (who would rather be designing place mats) to a Jamaican club as Jamaica is where they plan to go for the honeymoon. Totally out of character, we are told, the two of them take some cocaine before setting out.

Keisha is a young woman whose 5-year-old daughter Ruby is temporarily living with her mother under the guidance of the social services since Chris, Keisha’s partner and Ruby’s father, broke the girl’s arm in a fit of temper. Keisha has been besotted with Chris ever since the age of 13, allowing him to dominate her completely. Despite having no money (Chris steals what Keisha earns as an off-the-books care-home assistant), Chris insists on taking Keisha to a club one night as he has “business” to do there.

After both couples arrive, the owner of the club is murdered. Dan is the chief suspect, so is taken into custody and after interrogation by DC Matthew Hegarty, is charged with the crime. Because he fails to get bail, he’s imprisoned awaiting trial. The book tells the story of subsequent events from the points of view of Charlotte, Keisha and Matthew, as the two women separately have to ditch their previous assumptions and cope with new ways of life, and Matthew becomes drawn into the case in a way he could not predict and that might jeopardise both it and his career.

The Fall is written at an easy reading level, and has some moments of genuine insight into the two women’s lives. However, it is essentially a romantic novel with a dash of Martina Cole, rather than crime fiction. We know who committed the crime at the outset, so there is little suspense in one of the main plotlines, that of whether or not Dan is guilty. While Dan is in prison, the author focuses on Charlotte’s and Keisha’s everyday lives, but glosses over many practical details. Characters appear and disappear, or change their behaviour, for no apparent reason – for example Charlotte’s mother is a dominant force at the start of the book but fades out in the middle. Keisha’s role in the story is pivotal, for she is torn between protecting her child and whether she should tell Charlotte, or the authorities, the knowledge she has that would transform the case against Dan.

For a large chunk of the novel, nothing happens about Dan’s predicament while he languishes in prison awaiting trial; in particular, he has no lawyer. Despite plenty of holes in the police case, his parents (one of them a retired high court judge) refuse to help or even communicate with Charlotte or Dan, and Charlotte’s well-off father is very detached and won’t get involved. Charlotte’s stepsister is a journalist but won’t write about the case. Dan has told Charlotte that there is paperwork in his study that will incriminate his employer, yet she does nothing about this, or about finding a lawyer for Dan herself. Keisha is badly affected by a sudden tragedy in her family. Both women react somewhat passively to the situations they find themselves in, and the focus is on how they cope with recreating their personal and working lives. Yet towards the end of the book, for no special reason, parents become helpful; Dan’s and Charlotte’s previous employers both respond to the pressure Charlotte suddenly puts them under; the journalist stepsister changes her mind about a campaign. To my mind, this creates a rather artificial conglomeration of a climax.

In summary, this is a lightweight, readable novel that whiles away a couple of hours easily enough. I think the author missed some opportunities by focusing on domestic arrangements, romantic subplots and lucky coincidences (eg Keisha’s mother happens to go to the same church as the mother of the murdered man, which leads to a key plot element), rather than on a more detailed account of the criminal justice process or digging into any of the socioeconomic issues raised – many of them very interesting, but here treated fairly superficially. The trial that forms the climax of the book is the one time where tension is truly generated, but the author chooses to end the account of it at the most interesting moment, and focus instead on a “will they won’t they?” conclusion.

I was sent this book (unsolicited) by the publisher.

Read other reviews of The Fall at: Novelicious, Crime Time, and Crime Fiction Lover.

Q/A with the author at High Heels and Book Deals, and at Crime Always Pays.

11 thoughts on “Book review: The Fall by Claire McGowan”