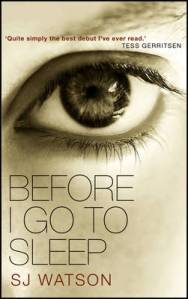 Before I go to Sleep
by S J Watson
Transworld (Doubleday), 2011.

As I am the last person in the UK, possibly the world, to read this book, I shall summarise the plot very briefly as I am sure everyone is familiar with it. A woman in her mid-40s, Christine, wakes up in bed one morning next to her husband in a nice north London house, but cannot remember anything about who she is or what she is doing there. She thinks she is in her 20s. The husband, Ben, explains to her that she has amnesia caused by a car crash, and has been in this state for more than 20 years. Each day is as if she has never been born, and all must be learned anew.

From this interesting premise the author develops Christine’s character (the book is entirely told from her point of view). She’s a determined woman who, after Ben leaves for work in the morning leaving helpful notes on the whiteboard in the kitchen (“wash windows”, etc), discovers a note in her handbag. This leads her to a rendezvous with Dr Nash, who tells her that at his encouragement she has been writing a journal of each day for the past two weeks (oddly, for the past 20 years of in-patient treatment, she has not been encouraged to do this). The main part of the book is Christine’s journal (written like a novel, but she is, we learn, a novelist), in which she writes down everything significant that she learns each day, in the hope that she’ll gradually re-learn her past. Nash, like no doctor I’ve ever known, helpfully phones Christine each morning to tell her about the journal and where it is, and is always available whenever she phones him, popping over to meet her in cafes, for example.

Ben is a shadowy character and seems pretty suspicious right from the start, for example he goes out to work each day leaving Christine alone with no carer or other company, and does not leave his work address on the whiteboard. By reading her secret journal each day, Christine learns that Ben keeps much from her, for example the existence of their son Adam, but there are always good reasons for Ben’s reticence. Via her meetings with Nash, which Ben does not know about (Christine leaves notes to herself to tell her not to tell Ben about the journal or Nash), Christine retraces the steps of her past life and hopes gradually to remember it. (She does, however, know some things instinctively, such as how to do the laundry even though she has not seen a washing machine for 20 years, or to be critical of her clothes because they seem suitable for an “older woman”.)

The last part of the book brings us back to the present, after the previous two weeks of journal entries. Christine feels that quite a bit of her memory has returned and has agreed to go away for the weekend with Ben, as she realises she loves him and appreciates his devotion over the years of her mental absence. Of course, all is not what it seems, and there is a violent climax to the story, with an over-hasty aftermath of explanation.

It’s a challenge to sum up this book. It would be very hard for it to live up to its reputation, and indeed it does not. There are so many clunky details about Christine’s memory and living arrangements that one simply has to ignore them. Christine lives in a sort of parallel Britain. Friends and family behave in inexplicable ways, not to mention the various health professionals involved (or, even more bizarrely, not involved) in the narrative. Christine as a character is admirably determined in the present day if not in her past life, but I did not find her realistic in her emotional reactions to some of the information or people she discovers, or thinks she’s discovered. Ben and Nash are both very flat characters. The author does not pursue the neuroscientific line that is sketched out a little, which might have added some interest to the plot. If this book had not been so heavily promoted and hyped, I’d put it down to a readable but minor suspense novel of the “women’s romantic fiction” variety. Why it has been praised so much (many famous authors admire the book, according to quotations on the cover), and why it has been so much more popular than what I consider to be much better suspense books published last year, I am at a loss to know – unless it is the double-whammy effect of a chick-lit/crime-fiction crossover readership! (If you’ve aleady read the book, or don’t mind plot spoilers, this Amazon review sums up briefly why the book just does not work.)

I borrowed this book from the library.

Other reviews of Before I go to Sleep: The Guardian, The Independent (refreshingly down to earth and nice dig at one blurbist!), The Book Whisperer, It’s a Crime!, Euro Crime (Lizzie Hayes), Reactions to Reading, and many others.

38 thoughts on “Book review: Before I Go To Sleep by S J Watson”