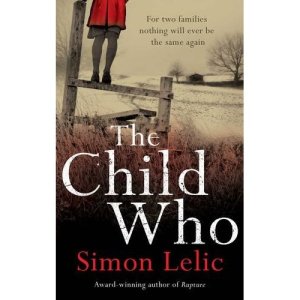 The Child Who
by Simon Lelic
Mantle, January 2012.

Most of this book is told from the point of view of Leo, the duty solicitor in Exeter assigned to represent Daniel, a 12-year-old boy who has apparently brutally killed a popular schoolgirl (aged 15). Unfortunately, we are told how she died. Leo takes on the case because he feels he’s never lived up to his deceased father’s expectations of him; he sees redemption for himself in undertaking this task. Leo’s wife and teenage daughter are less than thrilled, however, moving from disapproval to outright hostility (expressed mainly as withdrawal) as public and media opinion is solidly against Daniel and, by association, Leo. Soon the family is subjected to harassment and threats, most particularly against Ellie, the daughter.

Simultaneously with these events, Leo meets Daniel and the boy’s parents (mother and stepfather) and attempts to break down their wall of silence to find out what really happened, whether Daniel was responsible, and if so, why he did it. Although the author is good at portraying the interactions between Leo, the defensive-aggressive stepfather, the sullen Daniel and the silent mother, the character of Daniel fails to come fully into focus, which leaves an emotional gap in the middle of the book.

There is a suspense element to the story, resolved rather oddly (I think because the character of the daughter is mostly hidden from the reader), but the main interest of the book lies in Leo’s rather introspective nature as he witnesses and experiences the unfolding events of the crime’s aftermath. He takes a long time to take on board the degree of hatred concerning the crime, and seems strangely passive in the light of the threats against his own family that are made while he’s preparing for the trial.

I found it hard to become involved in the novel: none of the characters engaged my sympathy, and although the author attempts to create psychological understanding for the crime, I felt this was somewhat superficially treated. The subject of child murderers and children’s deaths is a harrowing one, perhaps the most difficult topic to read about. Here, the author seems to be trying to say something about society’s ability to deal meaningfully with an act of violence, or perhaps something about how such perpetrators are made or influenced to be driven to kill. Though I don’t doubt the sincerity of the author, I don’t feel that I gained insight or learned anything after reading this book, and because of its subject-matter rather wished I had not read it.

I’ve read the two previous books by this author, and had diametrically opposed views of them. I thought Rupture (A Thousand Cuts), the author’s debut, was superb. On the other hand, I disliked his second novel, The Facility. With The Child Who, I am at neither extreme, but given the subject-matter and the fact that there have been several real-life recent cases of child killings and/or abductions (it has been noted that this book may have “been inspired by” a famous case that also “inspired” Elizabeth George’s This Body of Death; some readers may find this kind of thing tasteless), I do find something slightly voyeuristic about fictional treatments of the topic. I don’t deny anyone’s right to write on any topic they wish, but I think such a book needs to be exceptionally good for me to think it worth reading.

I received this book free of charge via the Amazon Vine programme.

Other reviews of The Child Who: Mean Streets, Goldsboro Books, and Reader Dad. These reviews are all much more positive than mine. There is also a good collection of customer reviews at the UK Amazon site; most of these award the book 4 (out of 5) stars but others express a similar opinion to me.

About The Child Who at the author’s website, where you can read an extract.

9 thoughts on “Book review: The Child Who by Simon Lelic”