The first few chapters of this engrossing novel concern Sven-Arne Persson, following his life as a young peasant boy in the 1950s to his position, in 1993, as an influential politician in Uppsala. Overwhelmed by boredom in one of the interminable council meetings that he has to attend, and depressed by the shift in emphasis in his party’s membership from the working to the professional class, he walks out and vanishes. The account of what he does and how he lives is quite entrancing until twelve years later, when a Swedish trade delegation is the mechanism of delivering a great shock to Sven-Arne, who has to decide what to do next.

In the meantime, the Uppsala police are under-staffed and there are tensions within the team, whose leader Berglund is in hospital recovering from an operation. A severed foot has been found near Oregrund, on the coast. Somewhat reluctantly, Inspector Ann Lindell agrees to go and help investigate the crime. Bosse Marksson, the local cop in charge of the case, has done a thorough job but has run out of leads because nobody has been reported missing and none of the local residents in a wide area around the coast have seen anything. Ann spends quite a bit of time driving back and forth to Oregrund, gradually becoming keener as the case exerts a grip on her. She’s uncomfortable because her former lover Edvard lives on the nearby island of Graso (this book really cries out for a map!), and also has to do some childcare juggling as her son Erik is still at nursery (or preschool as the US translation has it). Ann is lonely and at that stage of life when she’s wondering if Erik and her work will continue to fill all her time, or if she’ll ever find a partner (she seems to have written off Edvard even though she seems also to hope he’ll return to her life).

An idle remark from one of her colleagues gives Ann an idea about the source of origin of the foot, leading her and Marksson to Bultudden point, a remote 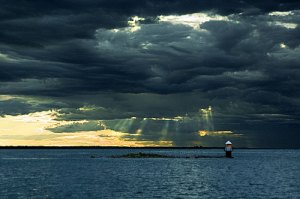 part of the archipelago where six or seven people live, and which has (so far) remained free of the second homes that are common in an area so close to Stockholm and Uppsala. Ann gets to know several of the elderly and/or solitary residents, convinced that the answer lies in this cold and challenging environment.

The Uppsala police are also involved in two other cases. One of them concerns the disappearance of Sven-Arne, which they have eventually come to hear about. The other is another “cold” case, that of the killing of an old man in his home some years before. This is a case that had always bothered Berglund, who put much efforts over the years into finding the perpetrator(s). Now he’s in hospital, he becomes interested in reinvestigating it.

For most of the book, these three themes are kept separate even though the same police team is investigating them all. This is crime fiction, however, so there is a reasonable bet that some relationships between them will emerge. The stories are all well-told, and there is enough depth in each of them for there to be a number of possible outcomes that keep the police as well as the reader motivated to learn more. As they reach their respective conclusions, I was pleased by the way in which the author delivers his plot twists and revelations without resorting to gore/violence, cheats or to other standard clichés of the genre, but instead relies on character, a strong sense of location, and narrative.

The by-play between the police characters was less satisfying to me, though probably no fault of the author’s, as it is a while since I read the earlier three novels in the series; and because the first few novels have not yet been translated, there is probably quite a bit of missing back-story for English-language readers. This same problem lies with the personal concerns of Ann Lindell, as English-language readers are not sufficiently familiar with her past (despite one or two brief summaries of previous cases that occasionally crop up here). However, these points do not detract from one’s overall enjoyment of The Hand That Trembles, which fulfils the promise of Henning Mankell’s cover words: “Eriksson’s crime novels are among the very best.”

Map showing Uppsala and the coastal locations described in the book. Oregrund is marked ‘A’.

I purchased my copy of this book.

Read other reviews at: The Bookbag, Murder by Type and International Noir Fiction.

Some background information. Inspector Ann Lindell of the Uppsala police is one of my favourite detectives, even though she suffers from the very common TOOO syndrome (TOOO = translated out of order). This book is the eighth in the series about her and her colleagues; so far translated into English are the fourth (The Princess of Burundi), the sixth (The Cruel Stars of the Night) and seventh (The Demon of Dakar). The Princess of Burundi and The Hand That Trembles are this year published in England (in their original US translations) by Allison and Busby; the others are available in their US editions, published by Minotaur. There are ten novels in this series, the first of which, The Illuminated Path, won the Swedish crime academy’s 1999 prize for best first novel, and the last of which, Open Grave, was published in Sweden in 2009. Several of the novels have either been shortlisted for or won other awards. So it beats me why poor Ann Lindell suffers so badly from TOOO syndrome, but I trust the cure will be effected soon.

My reviews of: The Princess of Burundi, The Cruel Stars of the Night and The Demon of Dakar.

17 thoughts on “Book review: The Hand That Trembles by Kjell Eriksson”