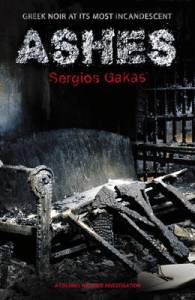 Crime fiction as allegory is here taken to the greatest extent I think I’ve read in a genre novel. Ostensibly, the story is about a house in Athens that burns down one night, killing an old man, a young woman and her 3-year-old daughter, leaving the remaining resident, fading actress Sonia Varika, severely burnt and in a coma. Police Colonel Chronis Halkidis of the Internal Affairs department hears news of the event and immediately calls in a favour from his boss so he can be assigned the case. We realise that this is the only way it will be properly investigated as the regular police force is corrupt to the core, essentially acting as an arm of powerful politicians and others.

In the hours immediately after the fire, we see events through the eyes of three characters: Halkidis; Simeon Piertovanis, an elderly lawyer who has just returned from a period abroad and who owns the property; and (in italics) Sonia. All three are interconnected, as we gradually learn through the mist of their memories and emotions concerning the past. Further, all three are pretty ruined, Piertovanis and Sonia by alcohol addiction and Halkidis by his choice to use cocaine to keep himself going to solve the case as quickly as possible (before he is shut down, or because Sonia, who is in intensive care, is in danger from more than her injuries), not to mention his addiction to cigarettes.

The two men, “wounded by disappointments and mistakes”, wallow in emotion as they both separately recall their past relationship with Sonia and how she affected them. The novel is saved from too much maudlin sentiment, though, by the sharp humour and poetic language (the translation is extremely able) and the brisk pace of Halkidis’s investigation with the help of his young team. Many layers of different crimes, criminals and professional rot are slowly uncovered as Halkidis pursues the truth while convincing his boss that he’s writing a government report and while the country prepares for the upcoming Olympic games, an excuse for any amount of wrongdoing to be brushed under the carpet.

Although I found the back story of the actress less compelling than the various set-ups and revelations that make up the police investigation, the two themes inexorably merge, not least when about 200 pages into the book, Piertovanis remembers an encounter in his office some while ago that he’d previously forgotten in a fog of alcohol, which provides both the motive and the identity of the crime and criminal(s). Nevertheless, this discovery also heralds the final plunge into despair of Halkidis, as he increasingly takes extreme measures to reach his goal. His anguished journey is paralleled by that of his county which is falling into unsalvageable ruin, helped on its way by the greedy and the opportunistic. Halkidis has his own code of honour, which means that he puts his own colleagues before himself, but also that for him personally, revenge takes precedence over justice.

After reading this book, one is left feeling that one has been on a dark journey showing us the many individual ways in which a society, or country, has been ruined beyond repair, often (but by no means only) by those who are entrusted with looking after it. As one who exists in this world, Halkidis has no other option but the downward spiral he embraces in Ashes. Marvellous stuff.

I thank Karen of Euro Crime for kindly lending me her copy of this book.