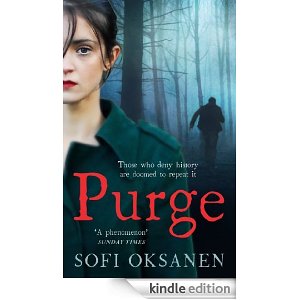 Purge
Sofi Oksanen
Translated by Lola Rogers (I am guessing from Finnish; the original was written in Finnish and the author herself is Finnish-Estonian).
Atlantic Books, this edn 2011.

Purge tells a tale across many years, from the 1930s to the early 1990s, and is mostly set in a small, remote village in Estonia. Aliide is an old woman who is terrified by the sight of something in her garden. She is extremely paranoid, living amid piles of old newspapers and artefacts, and spending her time almost obsessively preserving and bottling foodstuffs. She’s convinced that whatever is in her garden is an evil trick being played on her by the local youths, but eventually convinces herself to investigate. The “something” is the exhausted, damaged body of a young woman apparently from Russia – who is barely alive. Aliide helps her a little, but not very much as she transfers her suspicions to the girl herself. Gradually, slowly reassured by the girl’s ability to speak Estonian, her behaviour and reactions, she allows herself to help her come back to strength. She can’t help comparing the girl in her mind to her own daughter, who has left the region and lives a materially well-off life in Helsinki, to her mother’s incomprehension. (For example, Aliide offers her daughter some home-preserved vegetables, but the girl refuses as she can buy all that kind of thing at the supermarket.)

The damaged young woman is called Zara, who has been on a terrifying journey. Zara comes from Vladivostok, where she lived with her beloved grandmother and her emotionally remote mother, who keep all their possessions in suitcases in a cupboard. Zara was happy enough as a young girl, but longed to escape to a “better” (less poor) life. When an old schoolfriend returns for a visit, wearing furs and glamorous make-up, Zara persuades herself to follow in her footsteps, to devastating consequences. She escapes her ordeal and eventually finds her way to Aliide’s house, clutching a picture of Aliide and her sister Ingel as young girls.

Interspersed with Zara’s story is the much longer one of Aliide, who was young in the early 1930s. She and Ingel were happy in those times, but both of them fell in love with the same man, Hans. He had eyes only for Ingel, and the two were married and ran the farm together with Aliide’s help. The Germans invaded in the 1940s, and soon afterwards the Russians took over — and life under Communist rule was awful. Hans, as an Estonian nationalist, has to hide in the forest and eventually the sisters pretend he died in a road accident and create a hidden room out of a larder where he can stay in relative safety, only coming out at night. The Communist officials don’t believe that Hans, a well-known figure, is dead, and so they subject both sisters and eventually Ingel’s young daughter, to awful abuse in order to find out where he is. The sisters’ dramatic solution to their problem, and Aliide’s searing guilt and anger over many years, as well as her pragmatic survival skills that lead to her present-day paranoia, as well as explaining her pickle-making obsession, form much of the bulk of the book.

Despite the extremely harrowing nature of some of the events described here (descriptions that never cross the boundary into the gratuitous), I found this book absolutely compelling as an account of what it is like to live in a place occupied not by one but by several different regimes, and was drawn into the story of the little family who has to experience it all and somehow cope with impossibly hateful situations. The character of Aliide is very strongly drawn; Zara slightly less so, but she’s sympathetic and also admirable in her reactions to the tragedies she has faced. The plot is good, with several twists and punches as we gradually see the complete picture over the timescale of the novel. The author switches between time as well as points of view (usually Aliide’s or Zara’s) in her short chapters.

Purge is a very interesting novel as well as being extremely readable. It started out life as a play, and in its novel form won various awards in Finland and France as well as the 2010 Nordic Council Literature Prize. Reviewers of the book seem to have had a hard time of it working out whether it is a work of literature or a crime novel (!) which I find amusingly puerile and pretentious of them. I recommend reading it and judging it for yourself, I don’t think you’ll regret it as the novel is certainly deeply sincere and passionately as well as poetically committed to its point of view.

I purchased the Kindle edition of this novel for 99 p.

There are fascinating Wikipedia entries about the novel itself and about the author, which between them provide much of the historical background which readers are assumed to know. See also the article about the author and the book at FILI, the Finnish Literature Exchange.

The Complete Review has an unintentionally funny review of the novel, as well as linking to reviews in many other publications. One such, in The Guardian, is a lovely review which highlights the extensive poetry in the writing, in particular in the secret ways which people used to communicate when not allowed to speak freely. Other very good reviews of the book are at The Black Sheep Dances blog, Material Witness and the Nordic bookblog.

I have posted another edition’s cover of the book near the end of this review because I think it is so much more appropriate, as well as artistic, than the cover of the edition I read (shown at top of this post). Yet another cover can be seen at the US publisher’s website (Grove/Atlantic).