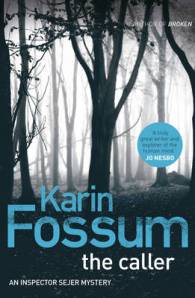 With her characteristic, unnerving attention to minor details, Karin Fossum opens her compelling new novel with a description of a mother putting her baby daughter into a pram in the garden while the infant sleeps. The atmosphere of menace builds up to an almost intolerable point as we just know something terrible is going to happen. The plot shifts to the police investigation of the incident, focusing on Inspector Sejer as he ponders both on the crime and on his own personal life – which is rather nice to read as Sejer has taken a bit of a back seat in recent novels. While he is sitting at home thinking, he hears something being delivered through the letterbox; rushing to the window, he sees what appears to be a slim young man hastily leaving the area. The missive turns out to be a postcard, with a sinister image and message implying that there will be more crimes in future.

What follows is a series of nasty tricks: a dying man receives a call from the undertaker, a well woman reads her own obituary in the paper, a young boy goes off on his own on a trek, and so on. We see these events through the eyes of the presumed perpetrator (but nothing is as it seems in a Karin Fossum novel!), who is a bored teenager called Johnny. He lives with his drunk mother whom he hates, travels around the region on his moped, and pays regular visits to the one person he relates to, his grandfather. We also, however, see events through the eyes of the “victims”, following the consequences of the mean pranks that often are the trigger for quite significant events in the relationships of those affected. These vignettes are one of the author’s main strengths, as she draws the reader into the lives of her subjects even when they appear only briefly in the novel.

My favourite character in the book is a young girl, Else Mietner, who rides a blue bike and shouts rude comments at Johnny as he rides past on his moped en route to his grandfather. Else is another victim of a cruel prank, but her method of dealing with it is brilliant. She’s very independent and observational – qualities which allow the reader to know what happens at the end of the book as a grim trick or two turn the tables on the trickster – as well as (in my opinion!) qualities that would make her a very good police detective should the author wish to move forward a few years in her next novel. Else would certainly shake up Sejer and Skarre if she turned up one day in police uniform.

All Karin Fossum’s translated books are listed, with links to reviews, at Euro Crime.

Read other reviews of The Caller at Euro Crime (Karen Meek), and by Simon Clarke.

I thank Karen of Euro Crime for my copy of this novel.

19 thoughts on “Book review: The Caller by Karin Fossum”