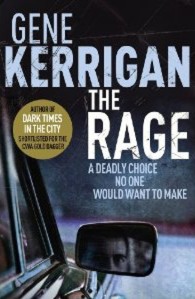 The Rage
Gene Kerrigan
Harvill Secker, June 2011
The Rage is an excellent book, and a lot more subtle than its title implies. I loved Gene Kerrigan’s first two novels (Little Criminals and The Midnight Choir) and though I liked the third (Dark Times in the City), I did not think it quite matched up to the first two. Here, the author has come up with a real cracker that I think is his best yet – although it is very well written, it mostly lacks the beautiful yet brutal poetic language of the earlier novels.
The novel opens with Garda detective sergeant Bob Tidy experiencing an epiphany at a crossroads in his uneasy life of trying to maintain his integrity in a profession plagued by compromises with criminals, with lawyers and the justice system, with the victims and the families of crime and criminals, with journalists and hangers-on, and increasingly, with political deals that go on above his head and which make a mockery of the peace he is sworn to uphold. Most of the book tells the story of how Tidy has arrived at this point.
This is a gripping yet multilayered novel of individuals caught up in their own fates. Vincent Naylor is a petty, impulsively violent thief just out of prison who is told by his brother, Noel, of a chance opportunity to make some real money. We follow some, but not all, of the brothers’ preparations for their crime, at the same time witnessing their daily lives, concerns and passions. Tidy has been in the police force for a long time (he has featured in previous novels as have one or two other characters, but The Rage isn’t a sequel and can be read without knowledge of earlier events). Though somewhat world-weary, he tries to do the right thing particularly by the ordinary people he has got to know over the years because their sons or grandsons were criminals or victims, or because they helped him as witnesses, or similar. Inevitably, he’s divorced, but has a rather touching relationship with his ex-wife and has much concern for his daughter – all laconically but movingly conveyed.
There are plenty of threads to this novel, in its account of crimes that seem to have no connection to each other, all set in context by the implosion of the Irish economy and its multifaceted knock-on effects on the wealthy and the average earner, the chancer and the law-abiding, alike. The book is full of neat and telling little observations, while at the same time never deviating from its sense that we are experiencing small brush strokes on a broad canvas – and that we’ll see the whole picture when the author chooses to reveal it.
I won’t provide more details of the convoluted, clever and involving plot here, suffice it to say that the story is very exciting, yet at the same time somehow elegiac as we see events mainly through Tidy’s eyes, and see his self-disgust at the compromises he’s been forced to make and that he realises are made by those running the police force who have completely lost touch with the ordinary people they are supposed to be protecting and serving. The final part of the book, in which Tidy makes the decision that is overwhelming him at the start, and how that plays out, is filled with tension and pace, not least because we even have a bit of sympathy for the least attractive characters in the novel, and have decidedly mixed sympathies for those who are apparently innocent bystanders. I highly recommend this superb novel by an extremely talented author at the top of his game.

I obtained this novel free of charge from the Amazon Vine programme.

11 thoughts on “Book review: The Rage by Gene Kerrigan”