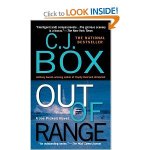 I read the fifth Joe Pickett novel in between two by Anthony Trollope – the Trollopes are very long; the Joe Pickett books are short, only taking a couple of hours each to read.

Out of Range takes Joe away from Saddlestring to the larger Jackson, a centre for tourism in the region, with white-water rafting and other sporting activities, in contrast to the much more local beat with which Joe is familiar. Jackson’s game warden has committed suicide, much to Joe’s distress as the man was a friend, and Joe is asked to help out in the aftermath. Joe’s supervisor, Trey, drives with him over the mountains to the secondment, but the two men are sidetracked by the need to hunt down a rogue bear. This prologue is rather a long and disconnected section of the novel and I’m not sure of its purpose, other than to re-emphasise Joe’s reluctance to shoot anything.
Once in Jackson, Joe discovers that he’s looked-down on as a country hick by most of his new colleagues and the people he has to deal with: law-enforcement officers, property developers, tourist guides, landowners and a representative of the “real meat” movement, in which people who were once vegetarians have now moved up or down (depending on your viewpoint!) to eating meat so long as they know the animal concerned and can ensure it has not been polluted by any modern farming treatments. There’s big money in this, and Joe is plunged into being pressured to complete the permit application for a huge area of forest for these animals to live. Joe’s concern is for the natural wildlife of the region, and whether elk, moose and other indigenous animals will be free to roam along their usual migration paths if the new “farm” is built.
Not only does Joe face this problem, but he’s not popular with the local sheriff, either, who has been pre-alerted by Joe’s previous nemesis, Sheriff Barnum of Saddlestring, that Joe is likely to want to investigate the warden’s death. Despite being warned off, Joe isn’t convinced that the death was a suicide, so begins to ask around.
In parallel with this plot, Marybeth, Joe’s wife, is struggling back at the family’s meagre home. She is resentful at Joe for leaving her to look after everything, and is soon embroiled in trying to deal with locals who need Joe’s services (as Joe’s temporary replacement has not shown up), and with a person who keeps calling the house and hanging up. Eventually, she calls on Nate, Joe’s falconer friend, to help – with mixed results that move the series on.
I am pleased that the author is keeping the series fresh by trying out new themes, rather than repeating the successful formula of previous novels. Although I don’t think Out of Range is the best Joe Pickett novel to date, it is nevertheless a diverting read – as usual, becoming darker than one might at first think as the pages turn.

I purchased the US mass-market edition of this novel. All the Joe Pickett series is being published this year in the UK by Corvus.
My reviews of the previous novels in the series:
Open Season (# 1)